Bird Feeder Cabaret: The Cardinal and his Mad Wife

No I am not talking about the Borgias... Here he is: 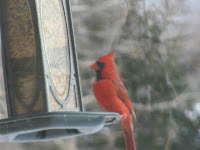 Cardinals were one of my American surprises. They look, for all the world, as though they should be living somewhere tropical but they are as North American as the next bird. They feature a lot on American Christmas Cards .. oops! Holiday Cards, where we would have robins on ours, (American robins being not very sweet and like the old British TV ad about everything in America being  Bigger! Bigger! BIGGER! )
Sadly, I also get the impression that cardinals are extremely stupid. All looks and no brains. Ours sits forever on the edge of the feeder, seemingly contemplating his navel, supposing he had one, as if he's forgotten what he's there for and hogging the space, which annoys the other birds. 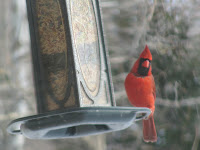 The cardinals' song, such as it is, is also extremely tedious, especially when they insist on perching right under our bedroom window. They are irritatingly early risers and more than once, I've woken up to hubby leaning out at 3.30 am yelling, "BUZZ OFF!"
The cardinal's wife is a much duller colour, which is the avian way and given to dashing her head against  window panes over and over again. Last summer, she built a nest in the most inconvenient place possible, just above where I turn the garden hose on and off. Every time I tried to reach it, she would fly off in a frenzy of squawking. But instead of finding somewhere more suitable, she always came back again.
Posted by Alenka at 7:54 PM