The Language Barrier 5: Have a Good Holiday

This one always catches me out. "Have a good holiday" in Britain mostly used to mean, "Have a good time in Clacton" (or Ibiza or Bhutan, or wherever), or possibly, "Have a good break from work". But this is America, where holidays are vacations and Have a good Holiday means Happy Thanksgiving.


Or a few weeks later, have a Happy Christmas. There's a period in the American year, lasting from Hallowe'en to after New Year's Day, which comes under the generic heading of "The Holidays".  As in, the average American puts on 5 pounds in weight during The Holidays.
I was terrified at the prospect of hostessing my first American Thanksgiving.  The culinary extravaganza that had to be done just right - turkey, stuffing (dressing, they call it) mashed potatoes (roast won't do) some kind of glazed yellow vegetable, which, presumably, was the Indians' revenge on the Pilgrim Fathers at the First Thanksgiving,  green bean casserole (forget it), creamed onions (I like those), cranberry sauce, and the dreaded cinnamon-laced pumpkin pie.
But now I've realised one thing. Americans love to help. It took me a long time to accommodate that, being a nervous, "stay out of my kitchen" sort of cook but Americans are positively offended if you don't let them bring something to the feast. So this year I have it down to a fine art: someone bringing pies, someone else doing the stuffing, hubby wrangling the turkey and all that's left for me to do is whip up a few side dishes and dig out the little Pilgrim Father cheese knives, while quaffing a good Californian cabernet I discovered by some miracle gathering dust in our local liquor store. (Incidentally, my brother-in-law once deep fried the turkey. While the rest of us cowered behind the window, he plunged it, once safely out of doors, into a contraption full of hot oil. It made a noise like a bomb about to go off, took just 45 minutes to cook and was delicious. )
Thanksgiving is an unusual sort of festival, since it revolves totally around food and getting together with family. You don't normally send cards or give presents.  So, even though a lot of buying food goes on, it's in a way refreshingly uncommercialised. (the same doesn't go for Black Friday,  the day after Thanksgiving, on which more later.) And the sentiments can be shared by anyone, no matter what their background or beliefs, with the possible exception of vegetarians.
So in company with every self-respecting American institution, this blog is taking a Holiday for a couple of days. Now. where's the corkscrew?
Happy Thanksgiving to one and all! 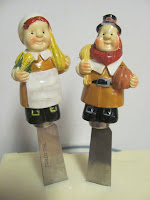