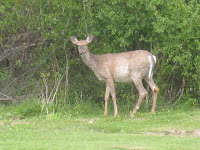 I suppose, being a townie, my heart comes down firmly on the side of the deer.  I’ll never forget my first sight of a group of white-tails tiptoeing through the snow-frosted trees by the side of the road, looking at us inquisitively, flicking back a cheeky ear and then trotting nonchalantly across. A  magical sight.  And one Opening Day, a giant, stately buck took refuge in our back garden, as if he knew that shooting within a certain distance of a house is a no-no.
But there are times, such as when I staggered out of my wrecked car after our fabled double deer collision , or went to check on the bushes I’d been nurturing all year and found them munched to the ground, when I've felt the beginnings of compassion fatigue.     Sadly, my head reminds me that there are just too many deer and too little food for them.
Hunting around here is anything but a snob sport. Country parents have taken their kids hunting for generations. When a neighbour's son, who helps mow our lawn, turned fourteen, the first thing his dad did was march him down to the office to get his hunting licence. Last year he told me proudly, "I got a doe".
And you get the feeling it's not just a sport. They talk of the almost mystical side to it, the communion between people who normally wouldn't agree, the bonding between father and son, the closeness to nature. And hunting is strictly controlled. You're normally only allowed to bag one deer each for your personal consumption. When I first came to America, I fell into  conversation with a local priest about the things that constitute traditional American values. I was surprised when he included gun rights among them.( I wouldn't be now).  “You know, there are lots of people in this county”, he pointed out, “who still sustain themselves by hunting and fishing– for those who can’t afford to buy much meat, it’s a valuable source of protein”. I thought of some of the rusty old trailers that pass for homes up in our hills. Yes we’re far from Manhattan here – in more ways than one.