As I've said, I'm simply a foreign observer and as sister-in-law and I drove through rural Pennsylvania, Virginia, West Virginia, North Carolina and Georgia, we tried to observe. I didn't exactly tot up totals this time but for what it's worth, the overwhelming number of signs we saw were for local candidates, not necessarily for the Presidential contenders. I'm not sure whether that's usual, or whether it says something about the current Presidential contenders. And of those signs that were for the Presidential contenders, the overwhelming majority seemed to be for Mitt Romney. But then we were driving through rural (if not necessarily affluent) areas. (Incidentally, I do think the official Romney sign-writers could have done with some advice. Apart from some home-made ones... 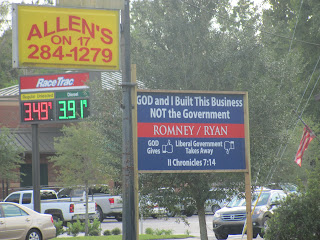 .. the signs were mostly a sort of insipid blue-on-a-white background and didn't exactly hit you between the eyes.) 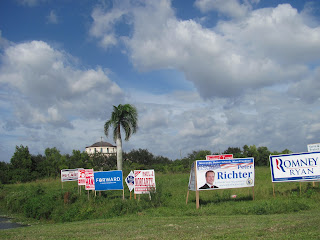 .
Things were slightly different once we got to Florida.    In DeLand , the university town, a bus turned up around morning coffee time, with a group of around a dozen Obama supporters, who seemed to be preparing to stage some sort of rally.  They were standing around rather aimlessly and there didn't seem to be a huge amount of interest but then it was early in the day.
It was on the suburban streets of Venice Island - a place where a lot of "snowbirds" from the north like to spend the winter, that we saw quite a few more Obama signs. 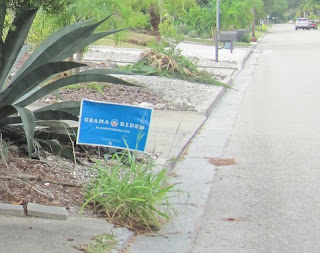 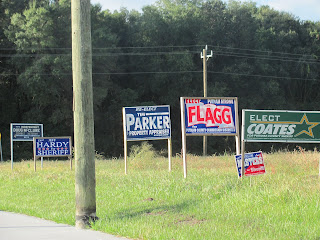 I'm not sure if anyone actually still votes for the town dog-catcher, as the legend goes but Americans seem to vote for just about everyone else. Democracy at work, no doubt.  The Presidential election isn't the only one on 6th November. Harlan Krimble for Sheriff, Isaac Sponaugle for House of Delegates and Rayelynne Ketchum for Clerk of Court probably won't make the headlines in Britain but they're big news in their local towns.    I hope the voters won't find it all as confusing as I do. 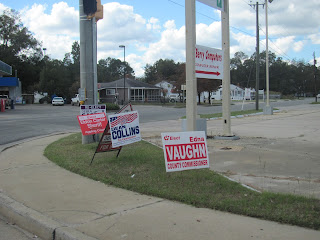