The Return of the Abominable Snowman

So we slip effortlessly from the Season of Thanksgiving to the Season of, Er, What are We Supposed to Call it Now?  Even the YMCA plays it safe with "T'is the Season". They don't say the season of what, exactly.
But a few inflatable Nativity Scenes, Penguins, Snowmen and Santas are already out in people's front gardens in town (not ours) , some still at the planning stage. 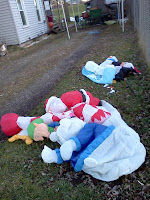 At Tops Supermarket, the Salvation Army fundraisers are out ringing their handbells with their collecting boxes. At least some of them wish you a Merry Christmas, even though it's, in my opinion, a little early for that.
But the biggest sign of the Season has been the dreaded sound of "Frosty the Snowman", echoing around the store.  It has quite a merry little tune - the first time you hear it. The five-thousandth time, it is excruciating. I would like to take a flame thrower to that Snowman, or one of those blow torches hubby uses to incinerate the tent caterpillars that lurk in our trees.
Posted by Alenka at 4:26 PM