Our Thanksgiving celebrations were a success, though the turkey went in rather tardily, due to us not wanting to wake the Stuffing Chef, who had arrived late the night before on a flight from Fort Lauderdale. 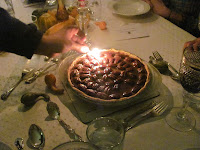 But after the homely, non-commercial Thanksgiving, today is a rude awakening. Black Friday. America's busiest shopping day. When the shops offer huge discounts and people kill to get their Christmas shopping done early and done cheap. Which in a way beats buying next year's presents on Boxing Day, as the cheapskates do in Britain.
I remember a friend describing, a few years ago, how she scurried to Wal Mart at the crack of dawn to beat the crowds, only to find her way barred by a seething gridlock of trolleys - carts, they call them here, quite appropriate as that's the size they are. . Once she'd fought through the melee, she gaped in amazement as two deer hunters in full camouflage gear and orange vests - possibly sent on a mission by womenfolk exhausted from cooking - charged up and down the aisles, clutching shopping lists (and probably their guns as well) high-fiving each other every time they found an item.
Local radio phone-ins have been full of Black Friday horror stories. One woman told how she'd got to Wal Mart early and joined the already long queue for a discounted flat screen TV. "I was number 50 in the line and they only had, like, 17 of them", she complained. However her brother-in-law had got the two laptops he was after.
Some shops now open for the Black Friday Sale as early as 8 pm on Thanksgiving Day itself, which is sacrilege to the purists.
That's probably why the date of Thanksgiving was fixed for the fourth Thursday in November - to give people just enough time to get into the Christmas Spirit. Except you have to call it Holiday Spirit here.
As for me, I had a narrow escape. One of our Thanksgiving guests was mulling over whether to take the plunge and go into the Mall - a sad, dreary place most times, full of closed-down shops but on Black Friday probably resembling the Dance of Death. She had a voucher for a shop called The Bon Ton, which doesn't exist around her way. But in the end, common sense prevailed and we both stayed at home with a cup of coffee.