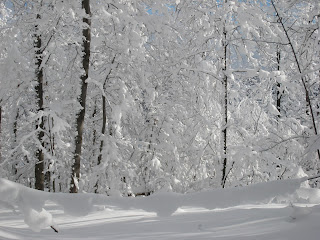 As we plunge into the "worst storm ever to hit the north-east", which has been a bit of a damp squib so far, the feathered scroungers are making up for lost time. 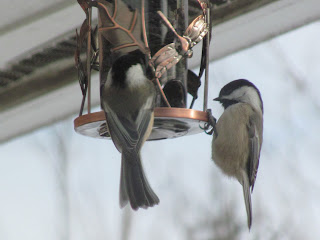 I have studied my guide to North American Birds and am getting better at recognising them. The chickadees, which look and behave a little like British tits,  swoop on the feeder from their launch pad, the crabapple tree and the plump, solemn, charcoal grey juncos, with their white fronts, like nonconformist clergy trying, usually without success, to do the same. They're just not built right. One has managed to work out how to perch precariously  on the edge of the feeder, wings whirring and is evidently the athlete of the bunch. The others probably disapprove and make do with pecking on the ground.
Meanwhile, every so often, a gang of American goldfinches shows up. While the chickadees treat the place like McDonald's - swoop, grab and go - the finches, drab in their winter plumage, chew everything 32 times. 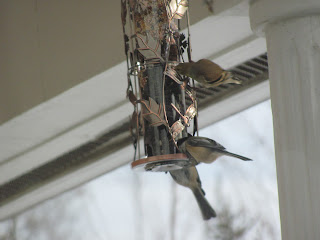 I do miss blackbirds and proper robins though. The blackbirds here are not the same. While British ones sing enchantingly, American ones sound like a creaky hinge. And some American birds don't look like birds at all. 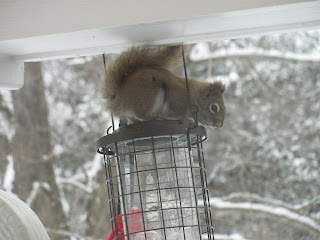