Dateline Western New York.  I am back, on which more later.....

groundhogs, furry rodents the size of a large cat,  are said to predict the weather. If they can see their shadow,  there will be six more weeks of winter. If not, spring will come early. (It comes, allegedly, from an old German custom which was related to Candlemas.)
I have to explain that America doesn't have just one prognosticating groundhog, but several. New York City has Staten Island Chuck; Georgia has General Beauregard Lee but the one you’re most likely to have heard of is Pennsylvania’s Punxsutawney Phil, whose fame spread after the 1993 film “Groundhog Day”, in which the hero has to relive the day over and over.  Phil reportedly saw his shadow this year when he was hauled out of his burrow, as usual, by several men in top hats, in front of the TV cameras and a crowd of thousands.

But here I have to set the record straight. None of the above can hold a candle – yes, you heard it here first, to  Western New York’s very own groundhog, Dunkirk Dave. (Dunkirk being one of those local villages that got themselves important-sounding European names. Others include Wales and Sardinia).
Around here, groundhogs are called woodchucks and they are considered “varmints”,  pests and nuisances.  They’re universally hated by farmers and gardeners for their fondness for vegetable matter and propensity for digging deep holes in awkward places.
But I feel sorry for them. They always seem to be running away from something.  Once, after we’d been travelling,  I surprised one on our front porch. Thinking he had the place to himself, he was happily waddling around,  when he suddenly looked up, saw me, did a double-take and beat it as fast as he could - no mean feat, considering how fat he was. 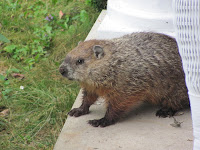 So I have a lot of sympathy for Dunkirk Dave’s handler, Bob Will,  who is quoted as saying that groundhogs  are God’s creatures too.  He has a house full of rescued ones, including “Sidewinder”,  who can only go round in circles, thanks to an irate farmer’s bullet.
According to local residents, Dunkirk Dave is much cleverer  than Punxsutawney Phil and people should pay attention to him.  Last year,  Dunkirk Dave did not see his shadow and we had one of the warmest springs in memory.
This year, Dunkirk Dave, enticed out of his burrow by pumpkin pie at sunrise today, once again predicted an early spring.* He has a 93 per cent accuracy record, I'm told and he'd better be right.