Your Money or Your Cast!

A word of explanation for my British readers:  You may have an image of American TV as full of endless commercials and American radio as full of ranting polemics and country-and-western music. You'd be right. Sort of. There is an alternative and it's called Public Broadcasting. That has an image too - of slightly left-of-centre earnestness and political correctness and because it also needs to make money, instead of commercials it has something if anything even more irritating, the Pledge Drive. It seems that every time I turn on Public Radio they're having a pledge drive, or "begathon", as hubby calls it, a sort of "cough up and we'll shut up" fest. One can understand why they have to do it but sometimes it can go just a little too far.

So, no sooner had Americans surfaced from reeling at the cataclysmic end of series 3 of Downton Abbey, on Public Broadcasting's TV flagship, "Masterpiece Theatre, which gets a lot of good British stuff  (yes, they've only just aired series 3 here) than the announcer came on and asked for money - more money and yet more money.
After which a friend sent me this cartoon: 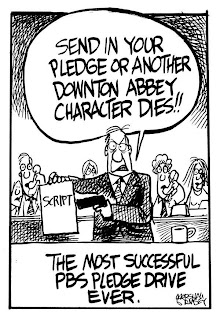