How Not to Transport a Picture

There is a postscript to our house furnishing adventure. We were in one of Venice's fabled thrift stores and there it was on the wall, a magnificent abstract painting, looking rather incongruous among the dusty scratched repro dressing tables and headless lampstands. The effect was dawn on the beach - palest blues, greys, a little hint of smoky pink.  One problem though, it was enormous. After we'd handed over the money, we realised there was no way we were going to get it into the car. A rental saloon car, in retrospect is not the best choice when you're buying furniture, especially when it doesn't even have a roof rack.  We should have splashed out on a pickup truck.
Could we walk and carry it? Probably not, since it was at least a couple of miles. So, persuading the thrift store to hold the picture just a little longer (they're draconian about such things) we came back with a newly purchased rope and a quilt off the bed.  We strapped the picture on the roof, which of course was one of those curved ones and tucked it in.

What followed was a hilarious crawl back with the thing balanced delicately up against the radio aerial. Fortunately hubby is a sailor and good with knots. But less good at bed-making and the quilt soon came unstuck and flapped like crazy. I thought we were going to take off.  Well the circus was in town and they probably thought we were part of it. 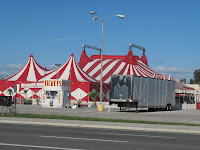 Luckily there weren't any police around. And it didn't rain.

And speaking of the circus - Venice, until 1992 was the winter home of Ringling Bros Barnum and Bailey Circus, aka the "Greatest Show on Earth". Nik Wallenda, who recently tightrope-walked across Niagara Falls is a local boy. A neighbour told me how everyone used to rush out to see the elephants parade through downtown Venice Avenue.  Now all that's left of the old winter rehearsal ring is a dilapidated building that still has "Venice Arena" in faded letters. They're trying to save it from demolition but one hardly sees the point, apart from the nostalgia value.. Next to it is a trapeze complex open to the public. It does have a large safety net but you'd have to pay me to try it.
Posted by Alenka at 8:17 PM