A full forty degrees F (Americans don't do C),  although it was minus 3 (F not C) overnight. Rather idyllic really.  From early morning on Chapel Hill.... 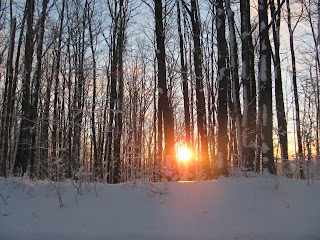 ....with the trees covered in icing sugar, good enough to eat, especially in America, where it's called confectioners' sugar.﻿ 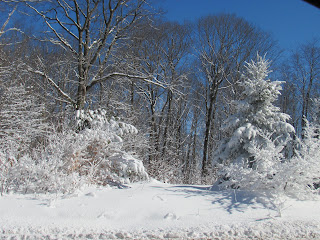 And someone's secret hideaway exposed. A little fairytale in the woods, it just appeared from nowhere. 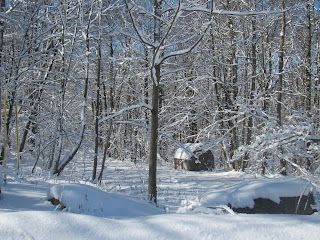 To the afternoon up our lane, where we observed the re-emergence from hibernation of a strange species, our neighbours.  Americans out walking - worthy of a headline.  A sequence of pleasanteries, "How you doin'?  The first beautiful day we've had in ages! Glad we're not in Boston!  Take it easy!" Normally we don't see them for months on end, as everybody drives everywhere. Except this chap, who likes to put himself about. 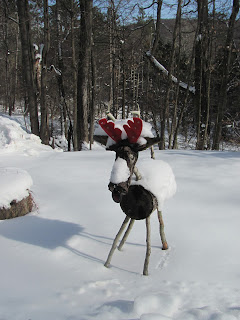 There's no knowing where he's off to when nobody's looking.... 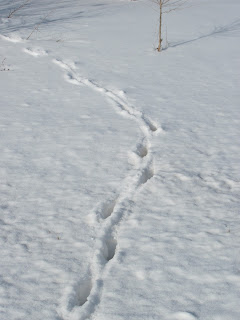 Though those may belong to his cousins, who've eaten my mountain laurel bushes. I hope they've got indigestion.
Meanwhile I've noticed that the neat, white-and-purple house up the hill  has an old anvil outside the garage. 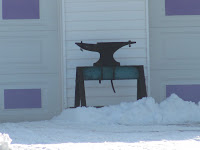 There's the stream where, last summer, I saw a strange animal swimming. A muskrat perhaps, or a fisher, alien names to me. Too small for an otter.  It's all quiet now. 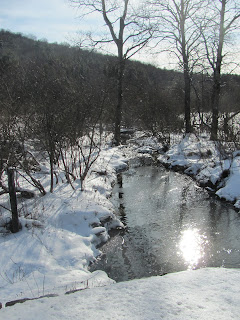 As is the lake at the top of the hill - under all that white stuff and now looking very different. 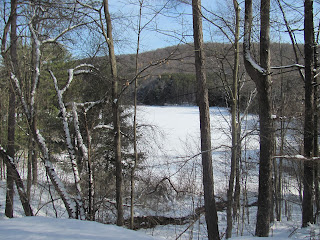 Seeing the changing seasons is one advantage Western New York has over Florida.  I'm sure there are plenty of others. Ask me again in the summer.
Posted by Alenka at 8:41 PM