I discovered, soon after I came to the United States, that their pancakes are not like our own. Although they bear a passing resemblance to the Scottish variety, they are bigger and brasher and so very American. Thick and fluffy and perfectly, symmetrically round, they are made to soak up gallons of maple syrup - the real stuff if you can get it, as made by our farmer neighbours out here in rural Western New York.  (Hubby shrinks in horror at the synthetic gunk you get in cheap diners and such).  American pancakes are not eaten with lemon, nor indeed icing sugar, nor rolled up (they're much too thick) and not generally as a dessert but most popularly for breakfast, with bacon and eggs, with sausage (we're not, to my sorrow,  talking British sausage  here), with blueberries or bananas. They may be made with buttermilk, with buckwheat, even with pumpkin.  Hence, if tossed in a race, which they're generally not, around here, they would  prove a formidable missile.  Personally, I like them with dollops of sour cream and fresh raspberries - oh and butter in between them. How quickly one gets on the road to perdition!
In a restaurant, you can't order just one.  They came in stacks - if you only want a couple, it's called a "short stack".  Here is a short stack of American pancakes, before and after embellishment, as seen and later devoured at the Southern Belle Truckstop. 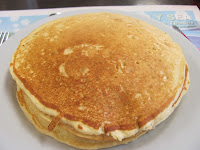 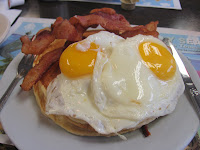 I'm not sure that America cherishes the concept of Shrove Tuesday as "pancake day", as Britain does. Every day is pancake day in America.  The restaurant chain IHOP, which, I only recently realised, stands for "International House of Pancakes" did hold a pancake day this year but I think they got their wires a little crossed. It was on February 5th. Hence I've had to educate hubby, who is an American-style pancake chef par excellence.  And as I write, I can hear him, quite unprompted, getting the griddle out. 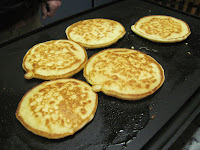 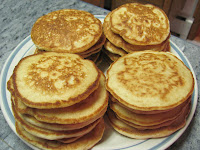 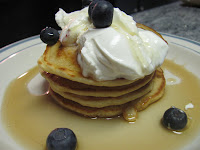