It has been snowing on and off since I arrived back and the cold bites like a steel rod through the heart. 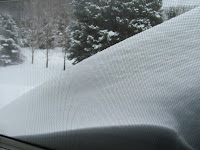 I ventured out for a few minutes to refill the bird feeder for the fluttering multitudes (where did they all materialise from after four weeks?) and lug the pumpkins that have been slowly rotting on the porch out to the compost.  I passed the mountain laurel bush I'd tended assiduously since coming here; by last summer it had reached nearly three feet tall, from only two leaves.   There was a gap in the netting around it and the deer had eaten it.  I have to try and console myself by thinking of the beautyberry I left behind in Venice (50 degrees warmer, incidentally). 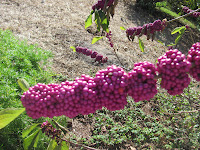 I expect the cloven-hoofed fiends would salivate at that. But they can't have her.  It will be a long, long while before I see her again.
Oh and sorry, this is a Super Bowl-free zone, as my feelings about American football are well known.  I did adore the Budweiser Clydesdale ad though, a take on "War Horse", soppy, sentimental, tear-jerking commercial manipulation at its finest.
And I am rather proud that the power-cut at the New Orleans Superdome lasted longer that the one at Craven Cottage on Saturday. There are some things we Brits still do better.
Posted by Alenka at 10:45 AM