I finally got out to ski. When I was living in Britain, arranging a ski-ing trip was a big, expensive deal, planned for months in advance, then hours on the Eurostar and a week of feeling you just had to hit the slopes to get your money's worth , no matter what the weather was throwing at you. Here, on the other hand, I can be shovelling snow and observe, "Sunshine!" and "Great powder!" After which, work and laziness permitting, I can sling the skis into the car and bat off to Holiday Valley, just 20 minutes up the road. 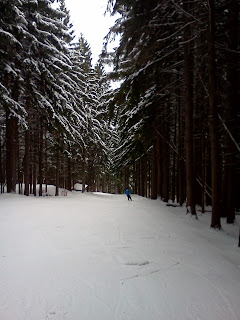 But before British friends get too jealous, I have to say that Holiday Valley, while extremely well-run, like most American ski resorts and with high-tech snow cannon going nineteen-to-the-dozen, is no Aspen (despite the fact that it hopefully advertises itself as "The Aspen of the East".) Nor is it the Alps. But it has nice, short, gentle runs like  "Mistletoe" (above), where you can really think yourself up in the mountains  Today I virtually had the slopes to myself, save for the clank of the chairlifts and the smell of woodsmoke from the warming huts on the air. Sadly not the smell of Gluhwein though. Americans are prim about that sort of thing,
A downside of Holiday Valley is the X-rated lift. This has underwear hanging all over the trees, which apparently has something to do with "Mardi-Gras" (sic) which HV doesn't celebrate on Shrove Tuesday but on some other date when tourist appeal can be maximised.  You get a lot of people coming down from Canada, which is very flat just across the border.
The other problem is that having ski-ing that close has made me choosy about the weather conditions. I have got so spoilt I don't fancy turning out in the cold, wind, ice, slush, heavy snow, light snow, sleet, fog - the list gets longer as I get older.  Which means I haven't been out all season. Shame on me and why I had to rectify that today.
Posted by Alenka at 4:27 PM