Sometimes I think the whole of America must be on the move. Even in freezing conditions and blowing snow,  people are crossing the country on giant Interstates that go for miles and miles and days and days, stopping at rest areas, the equivalent, I suppose, of the old staging posts, though not nearly as well-equipped. 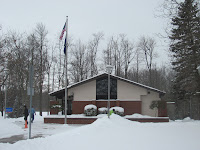 And the rest areas are so few and far between, which, in such a safety-conscious nation, seems odd. The ones on our trip down from Western New York, through Pennsylvania and on to West Virginia, were as skimpy as they could possibly be - just a utilitarian looking building, a couple of vending machines, sometimes, if you're lucky, a rack of maps and that's just about it. Outside, some welcoming signs: 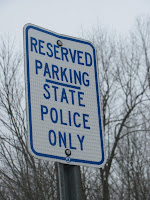 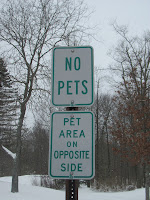 Oh yes and the picnic tables of course. 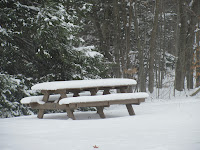 No Little Chef, no shops, not even a McDonalds. You have to go right off the motorway for that and in fact  motorway intersections have become a forest of fast food joints and cheap hotels - which probably explains why they don't want the rest areas to compete. But if you just want to stop for a bit it's a dreary desert. So very un-American I think, considering what a hospitable  people they are.
To be fair, I hear they're much better elsewhere. At least, after you cross the Florida state line, you get a free thimbleful of orange juice.
Posted by Alenka at 3:27 PM