This is Not New York City

If anything sets Western New York apart from New York City, it would be this event yesterday in our local town park. 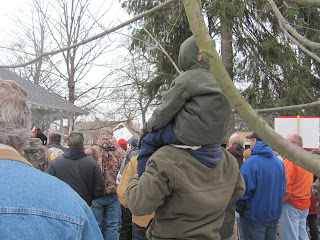 Angry at a new New York state law imposing heavy restrictions on gun ownership, supporters of the Second Amendment turned out in force, despite the ice and snow. 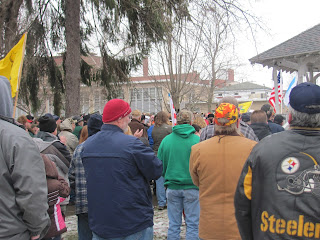 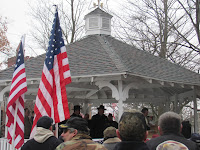 The right to bear arms did not, proclaimed one speaker, come from the Second Amendment but from God, along with the right not just to hunt deer but to self defence and to stand up to tyrants. In rural America, that's fairly typical talk. Prayers and pledges punctuated the proceedings. 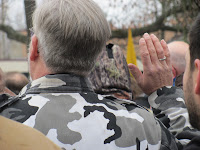 They seemed like a genuine cross-section of the local community, fed up, they said, with government encroachment on their freedoms.  A lot of hunters' camouflage, the odd grizzled ponytail, old soldiers, families, kids, dogs. The media and the urban chattering classes would probably like to portray them as nutters. I may not be exactly on their wavelength but I've seen more nutters walking down Oxford Street.

The Cattaraugus County Sheriff (yes, they still wear stars) got the biggest cheer and shouts of "Go Timmy!" 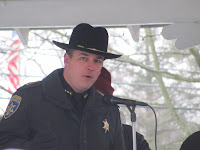 Three other Sheriffs were there too. One announced that he would not ask his officers to enforce an "unconstitutional" law.  The local Congressman, Tom Reed, was a speaker. 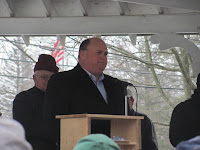 The state senator and representative sent messages of support.The way to ease the pain of Sandy Hook and prevent more atrocities, they argued, was not through banning guns. 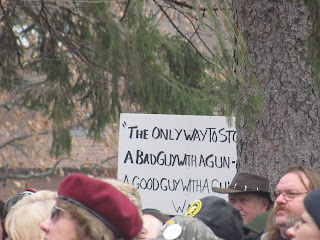 Though not everyone agreed. One person was spotted carrying a placard saying "Gun Control Works",  but on this occasion, he seemed to be a lone voice.
People carried flags with slogans from the Revolutionary War. "Here at Lincoln Park is our line in the sand!" said another speaker. 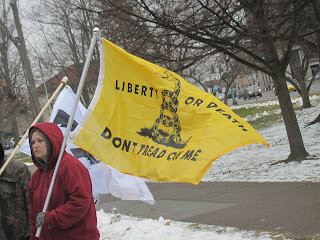 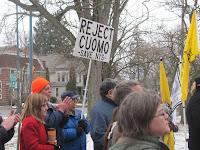 And it's not just about guns. 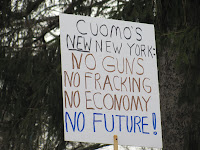 It reminded me a bit of the Countryside March that surged on London a few years back. 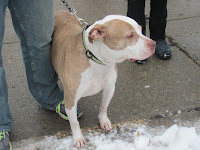 Everyone was polite and friendly. They seemed really to believe in something - an idea of freedom that they saw as part of America's soul. And they believed that few in the corridors of power, in Washington, in the state capital, Albany, cared about their concerns. It was all oddly moving.
Posted by Alenka at 7:13 AM